Anti Fracking – Why people are against shale gas fracking? 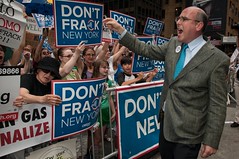 There have been exhaustive studies of the problems that fracking can cause for the environment, and for people that live in the areas where hydraulic-fracturing is taking place. Chemicals used in fracking are injected into the ground, and there is a chance that they can affect drinking water supplies, at a faster rate than was first believed.

The fluid injected by fracking operators is used in large amounts, and it’s injected under high rates of pressure. The theory was that impermeable rock layers would lock the fluids away far below the water table. But new studies have shown that natural fractures and faults may permit chemicals to reach ground water in only a few years’ time.

Much of the pollution to groundwater and methane issues have been brought on by poor drilling techniques. In these cases, the wells are built in ways that aren’t designed to contain gas in the well bore, but instead it can migrate out. Shale gas can get into ground water and into local drinking supplies.

The Evidence Against Shale Gas Fracking

Environmentalists and some others also fear that the use of hydraulic-fracturing equipment destabilizes the rock in which the drilling is done, leaving it open to seismic activity. Their fears have actually been backed up by several small earthquakes in the UK and the US, in areas that previously had no history of seismic disturbances.

A recent study suggests that injecting fluids deep into underground areas may cause more seismic issues than was previously believed. It may be linked with the strongest quake Oklahoma has ever experienced, in 2011, and over 180 tremors in Texas in 2008 and 2009 have tentatively been linked to fracking. Researchers have studied 67 earthquakes that were not reported as fracking-related and found that they are located within just several miles of injection wells. This suggests that quakes triggered by hydraulic-fracturing may be more common that was previously believed.

There are also environmental concerns about hydraulic-fracturing and the way it may affect the air quality of areas that surround the drilling sites. Diesel-powered machinery can pollute the air, as can the diesel trucks that haul in the chemicals and water used in fracking. In Texas, some readings have shown that emissions from gas and oil industry work in Texas have shown to be doubled. These affect the ozone layer, with is a serious health matter.

There are also toxic chemicals that can cause pollution to the air in the areas where fracking is done. The air emissions contain greenhouse gases, which add to global warming.