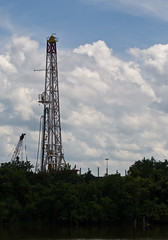 Want to know what is really happening with shale gas and fracking in the UK? Here’s some fracking facts that you might find hard to believe.

More facts that you didn’t know about fracking