Learn about the fracking process and how it works 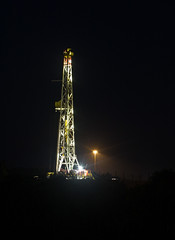 The fracking process is the unconventional means of extracting natural gas from shale formations that were previously thought to be inaccessible. This method has now been used around the world in over one million wells. It has been used on each continent with the exception of Antarctica to gather energy reserves that were once not available to developers.

Before the actual fracking process occurs, a vertical well is drilled past the groundwater aquifers. These are normally found relatively close to the surface, and the shale rock that contains gas deposits is found below these aquifers. Once the shale rock that contains the natural gas has been isolated, the drilling will level off vertically and then continue horizontally.

Steel surface casings are inserted into the full length of wells, and then cement is pumped in to enclose that casing, so that it does not leak into areas of groundwater aquifers. Additional casings are often added to the well, to prevent the contamination of the groundwater. Holes are then shot within the well, deep underground, giving natural gas easy pathways to the well.

The Dangers of the Fracking Process

A mixture of water, sand and chemicals known as proppant, is then pumped into a well under high pressure. The fluid will exit through those punctured holes, and the proppants open fractures where gas can flow up to the well surface.

The controversy comes into play when it comes to the chemicals used in the fracking process. More regulations are passed by states and countries each year, including rules that the energy companies need to disclose the chemicals they use in fracking. It is feared that these chemicals could lead to sickness from groundwater contamination.

The companies make every effort to use the least water that is feasible, and to recycle as much water as they can, after it has been used. About 90 percent of that water is used to re-fracture, which is effectively recycling it. Some developers are also looking into the possibility of using liquid nitrogen for the fracking process, to be used instead of water.

The industry is far from perfect, as can be said of most business ventures. The world needs energy and fracking helps to provide some of it. There are more than 60 years worth of hydraulic-fracturing research and it still is being monitored at the level of local universities.

Environmentalists are rightly concerned about the effects that the fracking process can have on the air, the groundwater, and seismic activities in areas where fracking occurs. It is generally accepted that more research still needs to be done, to alleviate some of these concerns.