Natural Gas Fracking – Solution to our needs or a dangerous problem? 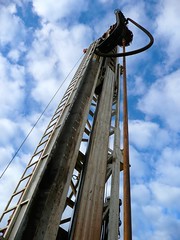 Many countries, beginning with the United States, have discovered that natural gas fracking is a valid means to get to gas that is otherwise not able to be recovered. In the United States alone, there were over 500,000 fracking wells in 2010, and Britain and other European countries are capitalizing on the success these methods have shown in North America.

The process known as fracking actually refers to the techniques used in hydraulic-fracturing, which retrieves natural gas with water, chemicals and sand. The drills fracture underground shale layers to release the natural gas they hold.

Below the surface of the Earth, that’s how fracking works. Above the ground, towns that were formerly sleepy places become alive with renters and hotel guests, and infused with cash and jobs. Many business people appreciate the economic upturn, but some people worry about the changes in their area and the possible side effects of fracking.

The issues with natural gas fracking

Shale fracturing has become more common, especially in the United States, with European countries also utilizing the technology to explore the reserves that are found beneath their landscape. Some of the natural gas is known as “wet” gas, meaning it is rich with propane, butane, liquid ethane and other heavy fluids that contribute to the making of gasoline. This is especially important, as the prices for natural gas have lowered, even while gasoline prices are often still near record highs.

Regulations have increased as the number of wells has done the same. Lawmakers are instituting regulations to cover the industry, requiring water testing and partial disclosure of the fluids used in fracking. It’s not only the actual drilling that adds to the change in the areas being fracked. There are also many trucks, workers and noise that accompany the drilling sites.

Unemployment rates have gone down in areas where fracking has entered the economic picture. Farmers and others who have leased land to drilling companies are told to be ready for the changes in traffic and noise and to check the water on their land periodically for methane.

The lobbyists for environmental concerns seek information that in some cases is simply not available. There is a certain lack of clarity in the way the side effects of fracking are explained. People understand that there is always the chance for air and water pollution from fracking, but there is also an influx of money to the communities where fracking is done, which has helped during the economic downturn in many local areas.