The process behind Shale Gas Drilling 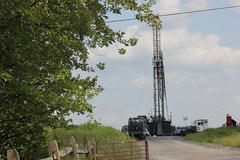 When energy companies use shale gas drilling techniques, they generally need a few months to complete each well. For a horizontal well, the site must be prepared to be drilled, and the rig must be completed, which includes cementing and casing, as well as moving any auxiliary equipment off the site of the well.

Shale gas drilling by hydraulic-fracturing is an important way to access reserves that were previously unavailable for production. Estimates show that the United States, which was one of the first countries to use fracking, has built in excess of one million shale gas wells since the original was drilled in the 1940’s. Each well is unique, and may pose different difficulties. Lessons are learned from each well that is drilled, allowing the technology to advance each year.

Fracking allows energy developers to extract shale gas and oil, in the areas where more conventional techniques are not effective. It uses highly pressurized water along with chemicals and sand, to create rock fractures that will allow the natural gas to flow to a well. Fracking actually represents all the aspects of development and well production. But the actual time spent fracking a well is only a brief time in the life of a shale gas well.

Bringing a well to a completed state usually takes from 70 to 100 days per well, and the well may be productive for over 20 years after that time. The production site is eventually reduced to a very small size, like that of a typical two-car garage. The rest of each site will be restored to the condition it was in originally. The local impacts, like land disturbance, dust and noise, are usually only experienced during the initial development phase.

In hydraulic-fracturing wells, pumping fluids or fracturing fluids are mainly comprised of water and sand. This is injected with high pressure into the formation that produced the shale gas. This creates fissures that will allow the resources to move more freely from the pores in rock where it was trapped.

Surface casing made from steel pipe is usually cemented in place, to protect the area’s groundwater. This is built at the top portion of each well. The amount of protection necessary for groundwater will largely determine the surface casing depth. As each well drills deeper, the workers install additional casing, which isolates the gas producing formation from the groundwater. It’s accepted practice in the industry to protect drinking water sources from the rock layers where fracking is used.