How does the shale gas extraction process work? 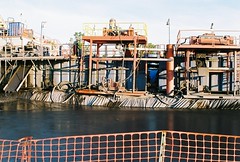 The method used for shale gas extraction involves hydraulic fracturing of rock layers by highly pressurized fluid. There are some fractures like dikes that form naturally, creating the means by which petroleum and gas may make it to reservoir rocks.

Hydraulic fracturing, also known as fracking, is a technique used in releasing shale gas from other substances. High pressure liquid is used to create fractures from bores drilled into rock formations. Modern fracking, done horizontally, was originally done in 1998, in Texas. Since then, it has been used in various areas around the world, including Britain.

The energy created by fracking fluids under high pressure creates new rock channels, allowing the extraction of shale gas. People and campaigners who are in favor of fracking point out that there is much economic benefit that can be achieved from retrieving shale gas that was once thought to be inaccessible. Opponents of the procedure worry about the environmental impact of fracking. This includes possible ground water contamination, air quality risks and contamination at the surface level from flowback, which is the excess fluid that is released after the shale has been fractured.

What is the technology for shale gas extraction?

Shale has low permeability and high porosity, so there was a good deal of research and development needed before methods applied in other types of drilling could be suitable for the extraction of shale gas. The United States began shale projects in the 1970’s. The technique called slickwater fracturing has proved the most economical in shale gas extraction.

Hydraulic fracturing has allowed energy companies to produce oil and gas from formations of shale deep below the surface of the earth. At these depths, it is difficult to get the target oil and gas to flow into the wellbore from the shale. So the fracking engineers create fractures in shale, giving them a better path to the usable gas.

Hydraulic fracturing pumps high pressure fluids into the well to fracture the shale and then uses sand in a mixture to keep the cracks open for the extraction of shale gas. The width is maintained using this mixture to prevent the fractures from re-closing. The leakoff of fluids into surrounding rock areas must be controlled or it decreases the amount of shale gas that can be extracted.

Horizontal hydraulic fracturing uses a wellbore where a lateral hole is extended in the shale, and it reduces the amount of surface disruption. This is due to the fact that fewer wells will be required to access the volume of shale needed to produce the shale gas.