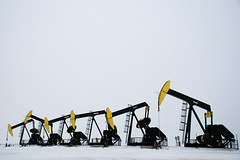 Shale gas production is often accomplished by hydraulic-fracturing, to recover gas that has been trapped in formations of shale. Shale deposits are sedimentary rock that have been found to be sources for natural gas, as well as petroleum. Hydraulic-fracturing and horizontal drilling are allowing companies to access larger shale gas volumes that were once too expensive to produce. The natural gas industry has been rejuvenated by shale gas production.

One of the first countries to use fracking was the United States, where roughly 94% of natural gas was domestically produced in 2011. This has decreased dependence on energy from foreign countries, and the deliveries are interrupted less often. Shale gas in large quantities allows the United States to consume more domestic energy, while tapping into a chance to produce even more gas than the country consumes.

Shale gas production prospects remain promising, and there may be larger reserves than were originally thought in North America and Europe alike. There are some deposits that are large enough that only limited portions have been tested for the feasibility of production. It’s also not known just how long the current wells will be productive. There may be more advancement in the future techniques, which will allow the extraction of even more reserves.

How shale gas production occurs and the process behind it

Shale gas can be found within shale formations called “plays”, where larger accumulations can be found. Information discovered from shale gas development and experience has improved the shale gas production techniques. Geologists and geophysicists work at identifying locations that would be suitable for drilling, using subsurface and surface techniques.

In hydraulic-fracturing, water, sand and chemicals are pumped into wells to retrieve natural gas trapped in previously inaccessible shale formations. Cracks or fractures are opened in the rock, which allows natural gas to more easily flow from those shale formations. When it’s used along with the practice of horizontal drilling, fracking allows energy companies to more economically extract the shale gas. If these techniques aren’t used, natural shale gas will not flow rapidly to the well, and it’s not commercially feasible to produce it.

Traditional reservoirs of gas are found after natural gas has migrated from an organically rich formation into reservoir rock, which is permeable. It is then trapped there by an impermeable rock layer. By contrast, resources of shale gas form in the organically-rich shale rock. The shale permeability is low, and this inhibits shale gas from migration to reservoir rocks that are more permeable.