The Secrets Behind Shale Gas Technology 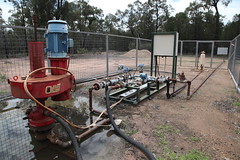 Photo by Lock the Gate Alliance

Shale is a brittle sedimentary rock, formed when deep mud comes under pressure by the geography of the region. Shale is rich organically, and normally is porous, but has low average permeability, which means it won’t allow the gas within to flow significantly in its natural state. For this reason, shale was not regarded as a reservoir rock, which stores gas and it also permeable. Gas produced from shale deposits is more difficult to recover, and thus, unconventional means of drilling, like hydraulic-fracturing, were developed.

There are reserves of shale gas many places in the world, including the Bowland Basin in the UK. Improvements in shale gas technology in the past 20 years or so has allowed energy companies to recover much gas that was previously not thought of as viable for commercial drilling. Shale gas now has international interest as a fuel source.

Technology has impacted the production of shale gas in the areas of fracking as a drilling method, as well as in seismic imaging. Directional drilling as it is used now is much improved since it became necessary to drill many wells from one platform offshore. In addition, hydraulic-fracturing is used to increase the gas output in areas of low permeability. Seismic imaging is helpful in mapping the shale deposits in 3D, to help in identifying formations which will be most productive.

The shale gas industry has enjoyed great success with the use of hydraulic-fracturing, or fracking, to obtain gas that was not previously believed to be recoverable. The technology that allows for horizontal drilling as well as vertical drilling allows fracking wells to be very productive.

China and the United States have been investigating their shale gas potential for the longest time, but other areas, including Poland and the UK, are also exploring their own possibilities. The technology includes the exploratory stage, where wells are drilled to check the shale formations.

The actual wells are usually drilled in three separate sections. During each phase, steel casings are installed and then cemented in place. This allows the well to retain integrity before hydraulic-fracturing begins. Most wells travel through shallow aquifers, usually several hundred metres down, to get to the deep shale formations.

Fracking equipment is used with fracturing fluid, which contains water, sand and some chemicals. This is injected at high pressure, fracturing the shale and freeing the previously trapped gas, giving it an outlet to the surface. The flowback water which also returns to the surface is contaminated, and it is disposed of. After exploration is complete, production begins and the fracking techniques are used to recover shale gas from the most viable shale formations.