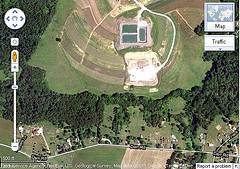 Fracking is a science. It makes use of fracking equipment capable of injecting the fluid into rocks lying miles beneath the surface.

Fracking uses scientific formulas to determine the exact mixture of chemicals, water, sand, and pressure required to create tiny little cracks in the rocks. The fracking fluid, sand, and water are forced into the well at an extremely high pressure to create cracks in the rock. The chemicals don’t erode the rocks. Rocks open up because they can’t withstand the pressure with which the fracking equipment pumps the water. Chemicals are simply added to the water to help it gel properly. When the water is thicker, it will be better at carrying the sand down the crack. Those cracks are held open by tiny sand kernels will release oil and gas trapped inside the rocks.

Sometimes soap ingredients are added to the mixture to prevent the growth of bacteria. Bacteria may release deadly gases.

In order to handle the water, sand, chemicals and the production of gas and oil, the fracking site needs to have the basics. A large number of trucks are used to carry and store the water, sand, and chemicals. A lot of truck horsepower is required to combine them all together to shoot the mixture down through pipes into a tiny hole in the rock.

Huge tanks are erected on the fracking site for storing the water. A typical fracking job may utilize 1.5 million to 6 million pounds of sand.

Trucks carry large quantities of pipes required to keep the fracking well open. The missile which ultimately pumps the fracking fluid down the hole is the most important part of the fracking equipment.
A hydration truck and a blender also stand nearby. The chemical mixture is added to the water through the hydration tank. The blender mixes the fluid with the sand. A typical fracking well can have up to 20 fracs. A frac job can take up to twenty hours.

The procedure is typically controlled by a crew of 5 to 6 people. They include representatives from the oil company, engineers, and supervisors. At the fracking site, there are some containers for storing the used water and sand. They will be hauled away later for disposal, injection, or recycling.
In due course, the crew will build tanks for storing oil and gas. There will also be vapour recovery units for controlling air emissions. All of them will be located near the wellhead.

When fracking is complete, the downward pressure will be removed from the fracking well. Within a few days, the pressure will reverse. This will allow gas and oil to flow to the surface.

At this stage, all the fracking equipment is taken away from the site. Only the storage containers, wellhead, the separators, and emission control units remain on the site. The production of gas and oil can last for several years.