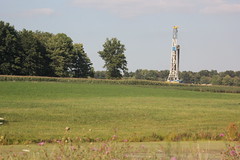 It seems like just a few years ago that no one even knew what fracking was, though it took place many years before that time. Fracking is the practice of extricating shale gas from shale rock, deep below the surface of the earth, to be harnessed as energy.

Fracking works by drilling a hole over 900 metres deep and one-third of a metre wide until you have hit gas shale. The rig is then turned 90 degrees and drills horizontally through more shale, to fit rigs and pipes into place. Then, water is blasted into the shale under high pressure, creating fractures about a millimeter wide. This allows the shale’s natural gas to escape. After the water causes the fractures, sand will keep them open.

Biocides are used in the fracking process, to keep the water from becoming clogged with algae and bacteria. Friction reducers are used to reduce wear and tear on the equipment. A solution of hydrochloric acid aids in boring out the holes. The mix used is about 99% sand and water, with other ingredients closely related to the average chemicals used in industrial applications.

How the Hydraulic Fracturing Process Works

The fracking process occurs well below the surface of the earth, and in levels separated from their closest ground water by deep and impermeable rock. As one engineer explains, “they couldn’t drill through that amount of rock even if they wanted to, so it’s not likely that it could occur accidentally”. It would take the equivalent of a severe explosion, possibly even a nuclear explosion, to blast through the rock that separates the shale oil from ground water, according to fracking engineers.

On rare occasions, it has happened that the ground water becomes contaminated to the point that you can light a match in your kitchen sink and create a small explosion. The truth is, water has been “burning” in some locations for many years, without man’s intervention. In the United States, for instance, burning springs can be found in West Virginia and Kentucky, and in New York State, where they once affected nearby streams and even Lake Erie.

In addition, wells that were being dug for water only caught fire in the 18th century in Pennsylvania, and this occurred many years before shale gas fracking would even be contemplated. Fracking, like all other means of extracting resources from the earth, is not without its risks, but neither is any other method of obtaining the energy that the world is clamoring for.