What Is Shale Gas? 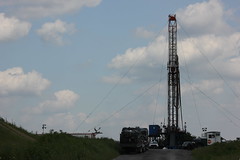 Shale gas is expected to expand greatly the amount of energy supplied for the world’s use. China has possibly the largest reserves of shale gas. It has been said that increasing development of shale gas extraction will reduce the world’s greenhouse gas emissions. It should be noted that some other studies indicate that its extraction and use may actually release more greenhouse gases than are released when conventional natural gas is recovered.

How is shale gas used as an energy source?

Many shale types do not yield natural gas. It is an unconventional source, so in order to obtain sufficient quantities to be economically feasible, the shale must be fractured, to provide adequate permeability. Natural fractures in shale allowed the gas to be more easily produced, but hydraulic fracturing is needed to create large enough fractures to obtain shale gas in quantity.

Shale gas wells are often drilled horizontally, having some lateral lengths of nearly 3000 metres. These allow the greatest area to contact with the shale. The most productive shale deposits used for gas extraction are organically rich, and they must be fairly rigid and brittle, to allow for the maintenance of open fractures.

Some shale gas is trapped within natural fractures, while other gas may be located in pore spaces. Some may have also been absorbed into organic materials within or near the shale. The gas that is found within the existing shale fractures is more immediately produced, while the gas that has been absorbed into surrounding organic materials will not be released until pressure is brought to bear by the fracking well.